Great design for “headspace”: inside are books, sheltered from the elements, for you to browse and borrow. 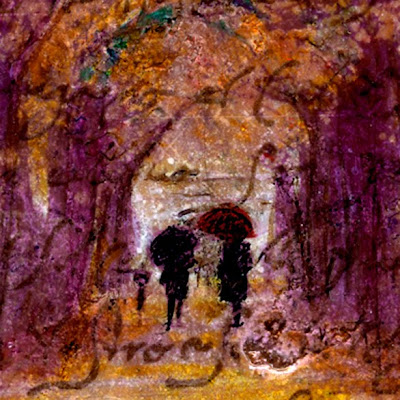 …that country where it is always turning late in the year. That country where the hills are fog and the rivers are mist; where noons go quickly, dusks and twilights linger, and mid-nights stay. That country composed in the main of cellars, sub-cellars, coal-bins, closets, attics, and pantries faced away from the sun. That country whose people are autumn people, thinking only autumn thoughts. Whose people passing at night on the empty walks sound like rain…

Dad never understood what I did for a living. Something to do with writing. Then he tried to buy a Harley-Davidson, since I was grown and he was having a midlife crisis. He could ride a bike and kill himself and everything would be fine.

He got turned down with poor credit. Asked for my help. Coincidentally, I’d been reading a business book on H-D in the 1980s, and I quoted H-D’s CEO from his testimony before Congress in my father’s letter: “All I’m asking for is a chance.”

About two weeks later, my dad called with news: he’d gotten a call from the OC dealership inviting him to come down and pick out any bike. “I don’t know what you said, but we’re supposed to give you the pick of the litter” and at excellent terms.

My dad still didn’t understand what I did for a living, but he told his friends for years after “he got me that bike.”

A love letter to libraries and aliens, for National Library Week.

For National Library Week, with gratitude.

I could read when I was 2, and some of my earliest memories are scenes from the mid-century Anaheim Central Library. Mom would cut me loose in the juvenile literature room, and I’d happily research bionics or whatever, though I was aware there was a greater store of knowledge in the rest of the building. The yellow juvenile card was my own, but all it afforded me was a chance to splash around in the shallow end of things.

So for my 7th birthday, my parents gave me the keys to the kingdom: an adult library card. This being the mid-Seventies, I was allowed to ride my BMX bike (helmetless) to downtown Anaheim (by myself) and wander the maze of shelves and floors (without ever once encountering a homeless person or furtive pedophile trolling the stacks).

Almost immediately, I found what became my first job and my second home: Section 001.9. The Dewey Decimal neighborhood where UFOs, Bigfoot, Nessie, and other unexplained phenomena lived. Not the inoffensive little green men like in the kids’ section, either–but this visitor from Flatwoods and many of my later nightmares:

God, the surge of interest in UFOs made it a wonderful time to be a kid. Living in suburban Anaheim, I understood the only way I’d ever meet Bigfoot was if he learned to use the bus system. But UFOs could land anywhere. You couldn’t fully let your guard down. The lights overhead might be aircraft most nights, but there was room for doubt. And all the kids on my block agreed that the yellow discoloration of decorative stones on a neighbor’s lawn could indeed have been caused by radiation from unknown craft bent on unknown missions. We each pocketed a sample. For science.

We had to prepare. I visited the library with a new purpose, not for myself alone but for all my second grade class. Well, the budding geeks in my second grade class. For the remainder of the 1976-77 school year, we spent the long lunch recess in the classroom while the uninitiated played endless kickball outside. I’d pull armloads of books from 001.9 out of my pack, we’d find the best pictures, and we’d make contingency plans:

Bill Marble answered that he’d run out the other way and call Miz Abbott or the principal to help. Wrong move, Bill:

None of these noon terrors and chills would’ve been possible without my access to an adult library card. 30+ years later, my library card remains one of my prized possessions, well-worn and occupying prime position in my wallet. So to libraries and librarians everywhere, a deeply felt thank you.

What a find! I popped into my local public library branch just before closing and saw this album cover as the centerpiece of their Halloween display–a blast from my past, and for sale at $1!

The album is a collection of sound effects from Disney–stock footage of wind, howling wolves, screaming cats, insane cackling, and all other things Halloween. Side A strings them together in a series of vignettes, mostly cheesy, but a few of these filled me with genuine dread as a kid, like the sounds of creatures chewing their way through a moon lander and its crew. I didn’t like to imagine an Apollo mission coming to such an end. Side B is just the sound effects, sans narratives, to serve as atmosphere for your own Halloween party.

This album was the soundtrack to many of my Halloweens–I’d ask my parents to cue it up while getting into costume. So it’s great to stumble across it now as an LP, even though I have MP3s of the tracks on my iPod already. I’ll frame it and display it proudly year-round.

I’m a good enough person that I won’t play the Cat Fight track just to see how my kittens respond. I won’t. Much.

Submitted for your approval, some examples of Rod Serling’s parting thoughts:

â€œThe Monsters are Due on Maple Streetâ€: â€œÂ The tools of conquest do not necessarily come with bombs and explosions and fallout. There are weapons that are simply thoughts, attitudes, prejudices. To be found only in the minds of men. For the record, prejudices can kill, and suspicion can destroy, and the frightened, thoughtless search for a scapegoat has a fallout all of its own: for the children, and the children yet unborn. And the pity of it is that these things can not be confined to the Twilight Zone.â€ END_OF_DOCUMENT_TOKEN_TO_BE_REPLACED

Might as well get started with a great link: Coolest Homemade Costumes.

All the best costumes involve some domestic engineering. Those box sets with chintzy character mask and vinyl poncho explaining what you’re supposed to be, since the costume doesn’t cut it? Early childhood FAIL.

Once I was at Disneyland and saw a group of Buddhist monks filing out of the Country Bear Kitchen restaurant, elderly men in salmon robes. Some children were playing tag in the crowd. One little boy, sprinting while looking backward at his friends, ran full-tilt into an old monk…

…who rocked with the impact, caught the boy to prevent him from falling, stood him back on his feet, and patted him on the head. All in one motion, all without looking down, and with no apparent interruption to his conversation with another monk.

And taught a lesson in reflexive kindness.